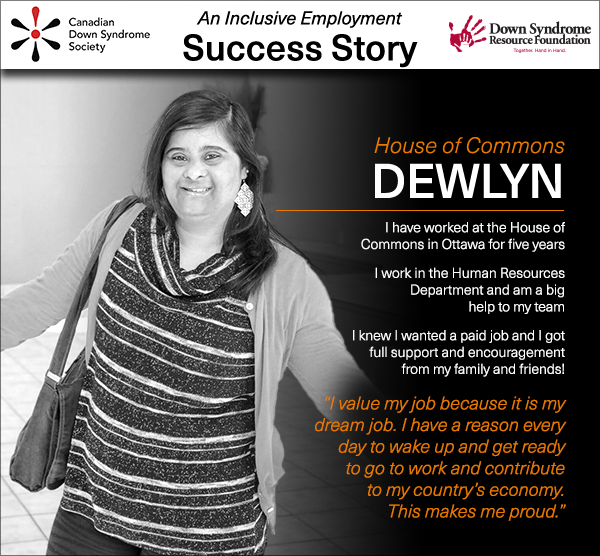 Dewlyn Lobo and her family have lived in many places.  From India, to Nunavut, to Ottawa, wherever Dewlyn lived she found herself a job.  Her story isn’t about ‘pounding the pavement’; it is more a story about setting expectations, having a positive outlook, and self-confidence.  As Anna Lobo, Dewlyn’s mother says, “In Canada, inclusion is not an option, it is a part of life.”  The Lobo family’s inclusive attitude has been present in their home ever since Dewlyn was born. According to Dewlyn’s parents, they “…shared the work from the beginning, even when Dewlyn was small.  Dewlyn was never treated differently, she had to do chores just like her sister, it was what was expected of the family.”

In India, Anna volunteered at a school, and introduced her daughters to the importance of community service.  Dewlyn also loved working with children, and eventually, she decided she would like to help at the school.  She approached the principal directly about working there, and at age 17 she had found herself her first paid job.

After moving to Rankin Inlet, Nunavut in 2008, Dewlyn spoke to a local restaurant about work.  They hired her and she was employed there until the Lobo’s moved to Ottawa in 2011.  There, People First of Canada worked with Dewlyn to secure a volunteer position in the Justice Building, and today Dewlyn works at The House of Commons in the Human Resources Department.  She has held her current job for five years, working Monday to Friday from nine until noon.

When Dewlyn’s parents are asked about the steps they took to make her career possible, they don’t reply with a specified plan or strategy.  Their loving response is, “We really didn’t do anything special, we just did the everyday things well. We believed that Dewlyn could do so much if we supported her, and we have done our best.  Each family is unique, just as each person with Down syndrome is unique, and parents know better than anyone else their own children and what they are capable of.  I am sure there will be many who could teach and advise us.”   Dewlyn, on the other hand, does offer strategic advice for those seeking paid employment. “Firstly, focus on your strengths, what you are able to do and what you love to do.  Second, understand your own energy level, and decide if you are able to work full time, part time, or just once a week, to make sure you have the energy level to do the work.  Third, believe in yourself.  Do not give up.  Write down a summary of all of the things you have achieved, and celebrate what you have done and learned.”

Dewlyn also suggests “Finding a positive, respectful, helpful, kind and dedicated job coach,” and when in school to, “make sure to start thinking of what you are good at and what you want to do after school.  You have to talk about it, think about it, and dream about it.  Co-ops, volunteering and placements are great ways to see what you can do and what is out there.  We need to change the way people look at us, we need to get a paid job and not be a volunteer for the rest of our lives.”

At The House of Commons, Dewlyn’s three-hour workday is quite varied, and very busy.  It consists of administrative tasks to help keep the department running efficiently, a daily mail run to four different floors, which she describes as her “most favourite part of the job.”  She also looks after a Wellness Library within The House of Commons.  She feels the greatest pride from her work centered on the library, although she also speaks of it as the most personally challenging part of her job.  Coined ‘Dewlyn’s Awesome Library’, she says, “The library work has many different tasks and I still struggle with some of the stuff.”  She has recently set some library goals and is striving to “…be able to take care of all of the tasks I have (independently) for the library.”  It is interesting to hear that the job she takes the most pride in is also the one that brings the greatest challenge.  In Dewlyn’s words “If you want something, you have to work very hard for it.”

Since starting at The House of Commons, Dewlyn has given up some volunteer work to balance energy levels and manage time; she also plans around her time off, adding “I don’t go away every year to India to be with my family.”  Her parents have adjusted their lives too.  Now retired, they “Focus on events, holidays and travel, keeping in mind that Dewlyn is working, and that her holidays and leave have to be approved.”  Dewlyn has learned to manage her time well.  “I use public transportation which has also helped with my self-confidence.  You need to be at work on time and be ready to do the work assigned to you.”  Dewlyn remains busy throughout the week: “I have to do all my other stuff on weekends or in the evenings and I am happy that I have adjusted so well.  My life is full.”

Dewlyn is a balanced, grateful person. “I have made friends at work and I value them,” adding, “I value my job because it is my dream job.  I am a tax paying Canadian like other people.  I am a federal employee.  I have a reason every day to wake up and get ready to go to work and contribute to my country’s economy.  This makes me proud.”

The Inclusive Employment Success Story series is co-presented by the Canadian Down Syndrome Society and the Down Syndrome Resource Foundation. Check CDSS website and the DSRF blog from June 10-20, 2019 for additional stories.